Showing posts from January, 2017
Show all

January 31, 2017
I was recently chatting with a friend on Facebook, a mature Christian with a lot of experience working with Muslims and a history in the Middle East.  The question we were discussing was, what do you think about the recent order to stop immigration from seven Muslim-majority countries for 90 days. I thought his answer was thoughtful and worth sharing with you all. So, with his permission, here is his response, with slight edits for the sake of clarity: I think the ruler of this age is clouding hearts and minds. People don't realize that this isn't high school debate with your teacher. Using bogus rationale and facts just to prove your point is going to cost the USA dearly with stuff like this in the real world. Obviously secularism and Islam have one major thing in common: the hatred of the Church. What's troubling to me is Chrisitans, even Christians who are well-versed in the evils of Islam, are shoving their heads in the sand and pretending like ji
Post a Comment
Read more

He Loves Me, He Loves Me Not: Abu Mussab Wajdi Akkari on Allah's Love

Does Islam need a Reformation?

January 27, 2017
Does Islam need a Reformation? by Abu Daoud I have noticed a good deal of talk regarding the hope that exists in the West of a Reformation for Islam. There are two points I wish to make in response. The first is regarding what exactly constitutes a "reformation." Historically the term refers to a decentralized group of reformation movements throughout western Europe in the 16th Century. But there is a significant gap between what the Reformers intended and actually accomplished. The complete picture is complex, but Calvin and Luther (among others) would be horrified to see the seemingly endless multiplication of Protestant-tradition churches we see today--that is, the continual splitting of denominations and ecclesial bodies. The Reformers did, however, claim that they were returning Christianity to its original, if obscured, Apostolic and Biblical roots. There was a concrete and pervading desire to reject what the Reformers understood as traditions that departed from the ori
Post a Comment
Read more

Is the Qur'an really from Muhammad? The Sana'a Manuscript

January 25, 2017
Muslims insist that the Qur'an they have today goes all the way back to Muhammad and has never been changed or altered. However, in 1972 during a renovation of the great mosque in Sana'a, Yemen, this palimpsest was discovered. But it turns out that we have two different manuscripts with edits written on this one palimpsest. Amazing. Learn more by listening to this talk by Al Fadi, a convert from Saudi Arabia. He is also founder and president of CIRA International .
Post a Comment
Read more

Allah is not ok with Tom and Jerry

And you thought it was just a harmless cartoon! Turns out that this venerable cartoon is in fact part of a huge plot to subvert the integrity of Islam....or something like that.
Post a Comment
Read more

The Qur'an and the Crucifixion of Jesus

January 18, 2017
The Qur'an and the Crucifixion of Jesus by Abu Daoud Excerpts from a Conversation with a Muslim Me: I am arguing that the Qu'ran does not actually say that Jesus was not crucified. The passage you reference is, "they did not crucify him, but it only appeared so." But if you look at the whole sura, you will see that it is discussing God's relationship to the descendants of the sons of Israel, whom we call Jews today. And historically, if you read the Injiil (Gospels), you will see that the Jews did not have the authority to crucify Jesus by their own power. They had to get the permission of the Roman authorities, and actually it was Roman soldiers that crucified him. So yes, to an observer it may have seemed like the Jews were actually totally responsible for his death, but that was not the case. So when I say that Jesus was crucified, I am not saying anything against the Qu'ran itself, which you believe is from God. Rather I am disagreeing with one tasfiir (in
Post a Comment
Read more

Islam: A Religion, and an Empire too! Part 2

January 14, 2017
Islam: A Religion, and an Empire too! Part 2 by Abu Daoud In Part IV of this series I established that Islam is more than just a religion, according to Western standards, which allow for a separation of religion and state. Islam contains within its teaching regarding the relations and duties of man before God a very specific political order. What is it? It is the caliphate. The Arabic word xalifa (caliph) means “successor [of the Prophet].” When God appointed Mohammad to be the Prophet who would bring the incorrupt and incorruptible revelation from God, he also chose him to be a ruler over the Umma. The caliphate existed in one form or another through the 20th century (1924), lastly within the Ottoman Empire (whose successor is Turkey). Devout Muslims therefore long for and must work for the restoration of the caliphate. This was precisely the desire of Abu Mussab al Zaraqawi (a Jordanian mujahid), recently deceased. He was a devout and good Muslim. This may seem like a troubling stat
Post a Comment
Read more

January 12, 2017
Islam: A Religion (and an Empire too!), Part 1 by Abu Daoud There are two central aspects of Islam that folks in the West tend to misunderstand. Because of these two flaws in our understanding we continue to make decisions and take actions that are ineffective or counterproductive in the Dar al Islam. The second thing is the relation of power to grace. But the first thing, which is related to the second, is that Islam, properly speaking, is not simply a religion, but an entire civilization. Islam is a holistic and organic system of life that includes very specific regulations and laws regarding everything from inheritance to divorce, investing to commerce, and—here is sticking point—regulations regarding government. Muhammad was the civil and religious ruler of the Umma (the Islamic nation) at the time of his death. Since a prophet gains immunity against sin once he has been called by God, he can do no wrong. This certainly gets around the messiness of dividing and distributing
Post a Comment
Read more

Islam and the other Religions

January 10, 2017
Islam and the Other Religions by Abu Daoud So here is the question: Is it important for Muslims to learn about other religions? As I discussed the question with a number of Muslims it became clear that their answer is clearly YES. Then why do Muslims know so little about other religions? Because they believe firmly that everything they need to know about those other religions is contained in the Qu’ran. Who do you believe: the verbatim Word of God that existed with him from all eternity, or texts that have been corrupted and misinterpreted by Christians and Jews? There is one word that you must learn in Arabic to understand how Muslims look at other religions: muharraf. It means something like corrupted and untrustworthy. This is the word used to describe the texts (called Books) of the other prophets such as the Torah which was revealed to the prophet Moses (Musa); the Zaboor, revealed to the Prophet David (Dahood); and the Gospel, revealed to the Prophet Jesus (Issa). Indeed, there
Post a Comment
Read more

Remember those riots in France?

January 09, 2017
Remember those Riots in France? Well, since I have France on my mind I thought I would post something I wrote back when those Muhammad cartoons came out. It was Part II of my series on Islam (recently published  Part XI  on this blog). Enjoy. Part II: Islam, Cartoons and Riots I was chatting with a friend of mine who lives in Saudi Arabia yesterday. She has always lived there, her dad has three wives, she has never been outside of the Middle East. She is a smart lady, and witty too. I asked her about the cartoon debacle and she said what many folks here are saying: they don't have the right to offend Islam that way. I just got back from spending some time with a very moderate Muslim friend who is not an Arab. His sisters don't wear head coverings, he doesn't go to mosque often. He compared the cartoons to people who praise the holocaust. I said that it was illegal to incite violence against a group, which is what you have in his holocaust example. Here violence was n
Post a Comment
Read more

Intro to the Qur'an

January 05, 2017
Part I: The Qur'an: Introduction It is often said that the Qur'an is like the Bible: one is the holy book for Muslims, and the other is for the Christians. This is not a very accurate way of looking at the situation though because the two books are very different. The Bible is really a collection of many kinds of writings (prophecy, poetry, genealogy, history, personal letters, and so on) written by a large number of people across over a thousand years. The Bible was written in three languages across three continents (Europe, Asia, Africa).  The Qur'an is wholly different. According to Islam, it was not written by anyone, it was revealed, word for word, from God, by the angel Gabriel (Jabriil in Arabic) to Muhammad throughout his life. The Qur'an consists of 114 chapters, called surahs in Arabic. These surahs are organized like Paul's letters to the churches: from longest to shortest. The second is "The Cow" which is 31 pages long (in the translatio
Post a Comment
Read more 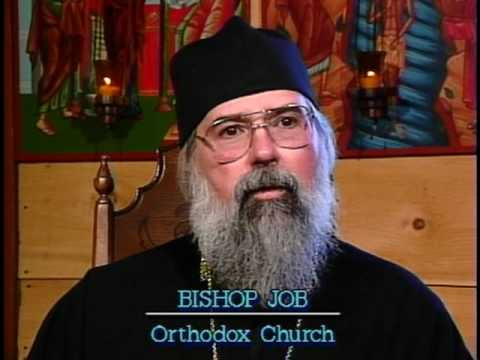 I love this quote: "The role of the Church is to witness to sanity. To real sanity in a world which has gone berserk. A world in which people speak of freedom, but no longer know what that means...people who speak a language which has lost its meaning." What a great quote! Check out this interview from the 90s with Archbishop Job . HT to The Sounding Blog .
Post a Comment
Read more
More posts