Showing posts from June, 2009
Show all

June 29, 2009
Great quote here from Gauri VISWANATHAN, author of Outisde the Fold: Conversion, Modernity, and Belief (1998 Princeton U Press). Her focus is India, and mine is the Middle East in specific, but Islamdom in general. Everything she says here is right on though and it was great to see someone (who is not a missionary) voice these thoughts: The underlying tension between the transgressive and the assimilitative aspects of conversion erupts most obviously and most dramatically in situations […] where the adopted identity of the convert is at variance with the cultural meanings sanctioned by that society. The radical displacements of meaning brought about by religious change are un questionably major political disruptions and treated as such in the discourse of the dominant community. […] Where there is such disparity, dominant communities prefer to use the term ‘proselytism’ rather than ‘conversion’ to indicate the forcible nature of religious change. The term also carries with it a bagga
2 comments
Read more

Sarkozy for ban on Niq'ab

June 25, 2009
Good for him: President Sarkozy once again showed the way yesterday when in a presidential address to France’s two houses of parliament, he said the burqa is not welcome in his country and should be banned. As he rightly went on to say the full-body garment which makes women in Afghanistan look like a cross between a prison cell and a walking tent is “not a sign of religion” but a “sign of subservience.” He added: “We cannot have in our country women who are prisoners behind netting, cut off from all social ife, deprived of identity.” From HERE .
Post a Comment
Read more

France may move to impose a ban on the burqa

June 20, 2009
Well, I am a big fan of religious freedom, but I actually could support this. I would not support a banning of the hijab, but I can certainly understand how France could determine that the burqa is demeaning to women. And salamu 3aleykum from Scotland! AD VOA
Post a Comment
Read more

The formation of children for Islamic 'martyrdom'

June 20, 2009
Solemn, worrying. Please read it all and pray for peace. There is political solution for the Israel-Palestine problem. The Gospel is the only thing powerful enough to bring peace. The continuous focus on trying to find a political situation is a form of idolatry--worshipping our own perceived abilities rather than God. Or what we would call in Islam shirk/association, whereby we place our own collective power on the same level as that of God. Thinking there is a political solution to the Israel-Palestine problem is destructive and harmful to everyone involved. Watch this, and weep. "Birds of Paradise" – Martyrdom Recruitment as Children's Entertainment
1 comment
Read more

Hizb ut-Tahriir in America: The Fall of Capitalism and the Rise of Islam

June 18, 2009
Looks like a very interesting conference there in the US. Heb ut Tahriir is a group that is trying to reestablish a unified Islamic Caliphate, the last one as dissolved in, what, 1924 I thnk? Anyway, check out this video advertising for this conference and if you're in the area then attend and make some friends. (The embed does not appear to be working so click over to YouTube and check it out there.) http://www.youtube.com/watch?v=W8Wg3j6MTJg
Post a Comment
Read more

An Assyrian scholar comments on the use of the word 'arab'

June 15, 2009
Carly Fiorina made a speech some time ago about the greatness of Arab-Islamic civilization. She made all the common errors, vastly inflating the rather tiny contribution made by Arab Muslims to science and knowledge. The Assyrian scholar Peter BetBasoo wrote a very nice response to her fairy-tale which you can read HERE . Among other things he explains that the great majority of translation of Greek texts into Arabic was done not by Arab Muslims but by Assyrian Christians. (How can people not know this?) An excerpt: [...] Arabs/Muslims are engaged in an explicit campaign of destruction and expropriation of cultures and communities, identities and ideas. Wherever Arab/Muslim civilization encounters a non-Arab/Muslim one, it attempts to destroy it (as the Buddhist statues in Afghanistan were destroyed, as Persepolis was destroyed by the Ayotollah Khomeini). This is a pattern that has been recurring since the advent of Islam, 1400 years ago, and is amply substantiated by the historical
Post a Comment
Read more

June 14, 2009
Abd-ul-Wahab was an incarnate whirlwind of Puritanism against the prevailing apostasy of the Moslem world. The sect which he founded and which took its popular name from him was a protest against Moslem idolatry and superstition. It stood for no new doctrine, but called back to the original Islam. Wahabiism was an attempt at an Arabian reformation. Yet so far from giving any progressive impulse to the Mohammedan cult, it has proved the most reactionary element in the history of Islam. This purely Semitic and unique movement, with all its energy, has produced nothing new; it has been directed exclusively toward the repristination of the old Moslem monotheism. The history of the sect shows that a reformation of the Moslem world by a return to primitive Islam (in theory and practice) is an impossibility, even when aided by the sword. Samuel Zwemer, the Disintegration of Islam, ch 2. (p 77)
4 comments
Read more

A Soteriology of Hospitality?

June 14, 2009
I would very much like your thoughts on the topic above. Is it possible to explain salvation in terms of hospitality? What does Scripture teach about the relation of hospitality and salvation? Abu Daoud PS: As always, you can e-mail me at winterlightning (at) safe-mail (d0t) net
2 comments
Read more 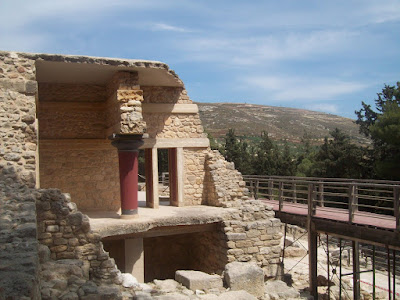 The picture above is the Minoan Palace of Knossos . Very old, huge. View of the Sea of Crete from the resort where we stayed. The Gulf of Mirambello That town of Hersonisos.
3 comments
Read more

Allah and other voices in the Qur'an

June 12, 2009
It is thought by many that the entire Qur'an consists entirely of divine speech. This is not the case though, there are are number of passages that must be either Muhammad's or belonging to angels. Here is an example of the latter: There is not one of Us but has his own position. Lo! We, even We are they who set the ranks. Lo! We, even We are they who hymn His praise. (37:164-166)
Post a Comment
Read more

Sexual relations in the Qur'an

June 12, 2009
Two important verses here: [Forbidden to you are] married women, except those whom you own as slaves. (4:24) Women are your fields:go, then, into your fields from whicheaver side you please. (2:223) Or in another translation: 2:223 Your women are a tilth for you (to cultivate) so go to your tilth as ye will, and send (good deeds) before you for your souls, and fear Allah, and know that ye will (one day) meet Him. My annoted Saudi version of the Qur'an adds the interesting comment "as long as it is not in the anus," but surely that is not in the Arabic at all. The Arabic is not very difficult in this verse actually (unlike many other verses in the Qur'an). It basically says "however you want to" or "as you like."
1 comment
Read more

June 06, 2009
Wow, what a waste of time. I'm sorry to be so negative, but what is this guy thinking? There is only one way to make the Muslim world happy: give them everything and require nothing at all. That is the only way. Crete is beautiful, but getting here was really a pain. Well, at least I didn't have to pull my pants down at the airport this time (yeah, I've had to do that before). Pictures will be forthcoming, in sha' allah. But give me a while. Blogging will be sporadic. Abu Daoud
4 comments
Read more

Crete and Blogging and what does inshallah mean?

June 03, 2009
Abu Daoud & Co. will be out of town for the next week or so (thanks be to God!) This is a good thing, after a fantastically stressful half-week so far--and it is only Wednesday! All this to say, the blogging will be spare. Hope you all are well. I will be enjoying Crete, in sha' allah. Ah yes, in sha' allah. Just what does that means? the word 'in' makes the sentence conditional: IF. Sha' is the past 3rd person masculine for "to will" more or less. And Allah, well, I'm guessing you know who Allah is. Thus it means "if God willed it" but in Arabic the past tense in conditional sentences also applies to the continuous, making it both "if God wills it" and "if God will will it." In practical parlance it can mean anything from "I hope so" to "maybe" to "I don't want to, but I'm trying to be nice about this" to "I have no idea" to "that's fine with me." Thus I
6 comments
Read more

June 02, 2009
[...]The concept that world history consists of a sequence of prophets, and that with the coming of the prophet Muhhammad a final stage of history has been reached, is helpful for the development of a historical consciousness. The idea of consecutive prophets creates a historical ‘spine’ to the nebulous mass of events in the world. On the other hand, the super- human perfection of these prophets militates against writing a serious history of these individuals; its basis is so unhistorical that it places their histories outside the boundaries of critical scholarship.[...] From John Stringer's recent article in SFM 5:3, June 2009, p 104.
Post a Comment
Read more

Lewis" Why did Islamdom decline while Christendom flourished?

June 02, 2009
Bernard Lewis: An argument sometimes adduced is that the cause of the changed relationship between East and West is not a Middle Eastern decline but a Western upsurge—the discoveries and the scientific, technological, industrial, and political revolutions that transformed the West and vastly increased its wealth and power. But this is merely to restate the question: Why did the discoverers of America sail from Spain rather than from a Muslim Atlantic port, out of which such voyages were indeed attempted in earlier times? Why did the great scientific breakthrough occur in Europe and not, as one might reasonably have expected, in the richer, more advanced, and in most respects more enlightened realm of Islam? What Went Wrong? The Atlantic Online, January 2002.
Post a Comment
Read more

Oh boy! New issues of St Francis and LWP are out

June 01, 2009
Am presently reading through both. Saint Francis Magazine and Lausanne World Pulse are two of my favorite publications that deal with questions of missions and Christian witness. LWP is lighter, all-purpose material, and SFM is more dense and focused on the Muslim World. Alas, Abu Daoud has nothing published in this SFM, which is fine because I have been busy with other stuff. Articles I am particularly interested in are: Bridger's article on Kenneth Cragg (one of my heroes) Miller's article on " Cracks in the Foundation of Islam? " and Stringer's article on the Qur'an's view of patterns in history. And this is new: you can DL the entire journal as one PDF right HERE . In LWP I am interested in the article on the future of Asian missions by Yung.
Post a Comment
Read more
More posts